An Epiphany about mince and meat pies 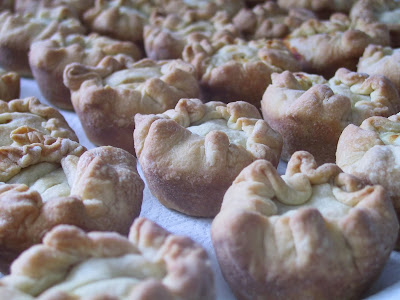 I was reading in this book (which is among my Christmas reads) its chapter about mince pies, when something struck me: mince pies are pretty much not so distant cousins of the pork pies, or meat pies (pâtés à la viande as we call them in Québec) which I have been eating all my life and which are an important part of the traditional Christmas supper in Québec. I blogged about the pie recently in French, surprisingly the post got me many comments from my non-francophone readers. You can find the recipe on PJ's blog here. Anyway, here is my theory: both pies are important, in their respective region of the world, during the Christmas season and are closely associated with it (even though we can eat meat pies all year round in Québec, they ar emore prominent during Christmas). The mince pie is a pie from which the minced meat has now been taken off, while in Québec, the pork pie is made of minced meat, more precisely pork and some veal, but has no more fruit. It has still, however, some spices and herbs in it. And anyone can see the family resemblance. So there you have it. Something that has been so familiar to me has its origins in at least the middle ages. I might make a wish every time I start a pâté à la viande now. In any case, I encourage all my friends in the blogosphere to try the recipe on my brother's blog. Te meat pies are delicious and a perfect substitute for pigs in blanket.
Posted by Guillaume at 21:24

one of my favorite things to make is any kind of meat pie. and i make all kinds of them. what could be better!

From what I understand, mince meat pies never did have meat in them. The "meat" in "mince meat" refers to what quaintly used to be called "nut meats." So mince meat has always just been fruit, nuts, spices and suet/lard to hold it all together.

You could have linked to the post that starts with the English version of the recipe.

@Jaz-I hope you make this one.
@Debra-From what I read, there was at the origins a good deal of meat, although not the best part.
@Voilà c'est corrigé.