A good deed for Advent 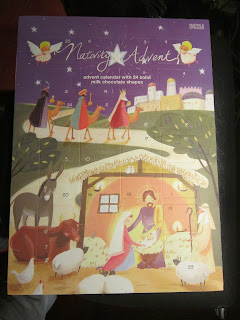 As we are the second day of Advent, I thought my readership might like to read a Christmas story. So here is a little true life Christmastime story, so it is totally original and exclusive to this blog, that happened to me two days ago, just before Advent. It is a good deed I did, which made me quite happy. Not only Christians are good for goodness's sake, if I can say so myself, Godless men can be too. A little foreword before I start telling it: I do buy Advent calendar sometimes. Not every year, it is not a tradition I follow religiously (ha, ha, ha), but I do enjoy one small chocolate a day. In school, we had those paper advent calendar with a moralistic story on every day, instead of chocolate. It always ended with a Nativity Scene on the 24. In a way, this is my own, secular feel-good story. But it is not really moralistic.

So this year, I had in mind to buy one. Last year I had a very old-fashioned one from Marks & Spencer, with a Nativity Scene on it. This year, I had in mind to buy it from the local sweet shop. There was a beautiful one, with a lush old-fashioned image on the cover, very Victorian, with a jolly Santa Claus delivering the presents in a luxurious salon. There was a huge Christmas tree too. The cover was so beautiful, one would be reluctant to break it by opening holes on it. There was one left when I arrived at the sweet shop, a few minutes before closing time. I took it, was about to pay for it, when a girl of about eight and her mother walked in the shop and eagerly went where the calendars were. I suddenly heard a big cry: "Oh no, it is GONE!". I then saw the girl looking at the empty space on the shelf where the calendar had been. Her mother was telling her gently that there were others with a different image (but let's face it, the others looked pretty lame) and that she should have bought it earlier... And then of course I turned around and said: "I am the one who took it, but here it is, take it." The girl took it, looked at it a long while, as if she was not sure it was real, her mum had to tell her to thank me before she said a word. So that was my good deed of the day and my first Christmas good deed of the season. And I don't have an Advent calendar this year, but cannot care less.
Posted by Guillaume at 20:47

A good deed done well. Balm for kiddie souls I tell you.

Oh well, console yourself with a nice chocolate stout maybe.

I managed to get a different sort of Advent calendar, basically a big chocolate bar with the dates of Advent on it.