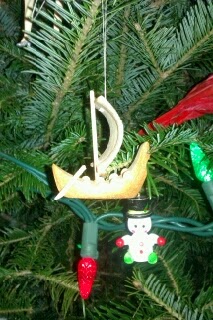 Merry Christmas everyone or, as I say now and maybe for now on, Good Yule! I have decided to embrace Christmas' Pagan roots. Not like a neo-pagan, but more like a Godless heathen who loves the primitive symbolism of Christmas, which Christianity never really tamed. So yes, troll the ancient Yuletide carol, as I said before. And I associate Christmas with Norse mythology, from which it heavily borrows some of its most famous elements. Hence the Viking ship you can see on the picture at your left, it is a Christmas tree decoration my family bought in Sweden I believe. And there's a snowman who managed to get in the frame, but the thing I wanted to show the boat more. So yes, good Yule everyone! To my Christian readers, my fellow heathens and the rest. Eat, drink and be merry.
Posted by Guillaume at 11:06

good for you! celebrate whichever was makes you happy! good yule to you too!

that would be 'way'. i really need to slow down and proof read!

Good Yule, heathen. May Odin be with you in spirit today, both the cat and the god.

Thank you all for your comments.