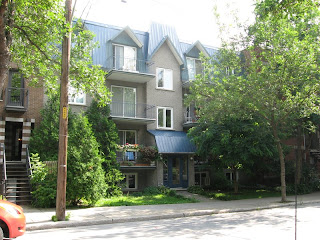 This is the picture of the "old" apartment in Montreal, from the outside. The one I used to live when I was doing my degree, back in the nineties and then when I worked in Montreal after I finished my PhD studies. The first years I lived there, the roof was a dark, disgusting brown. Otherwise, well, it is maybe a bit modern for a building on the Plateau Mont-Royal, but it is, or at least it was, a lovely place.

I blogged about it before, when it got sold particularly. This picture was taken at the time it was put on the market. I miss the place a lot. I was looking at that picture and I remembered that I haven't seen Montreal during summertime in a long while, not since 2009. Outsiders imagine Montreal and Québec as cold places, winter land, and sure enough they have winters, but people forget that are four seasons in a year everywhere and Montreal is different in each and every one of them. It can be really hot during summer. For a "big" city, it is also green in many places, especially on the Plateau, as you can see on the picture. This is something I miss from Montreal's summers: being in an urban area yet not feeling its urbanity too much. I spent a lot of time in the center where I used to work (giving French classes for employees of video games companies), but there was always the Plateau Mont-Royal I was getting back to. A green haven in the city. So yes, I kind of miss it these days.
Posted by Guillaume at 22:41