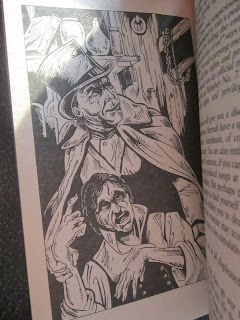 I have been reading/playing Dracula's Castle. I mentioned here that there is plenty of tongue in cheek humour and self parodic elements. While reading/playing, I (re)discovered one of its characters. I think he was inspired from the Hammer movies. He looks like he was taken from one of them anyway. It's him on the picture at your right, the man with the top hat (the other being a corpse). He is the Happy Undertaker. His name is Unimportant, Samuel Unimportant. He is an eccentric man, but he there is a sinister side to him, not only because of the company he keeps, but because if made angry during the adventure, he becomes a Funeral Fiend, some kind of demon/werewolf mix. I might upload this picture one day.

But even as an eccentric man, he has this dark edge, in spite or because of his twisted sense of humour. When the hero, Jonathan Harker, played by the reader, comes in the mortuary of the castle where the Happy Undertaker is, he discovers that the man is a member of a political party composed of corpses... "They sit in the Lords, so nobody notices the difference," he explains. The cadavers all drink lemonade, while the Undertaker has a wide array of alcohols at this disposal. And he explains why: "You don't think I'd waste good liquors on corpses, do you? There are limits even to friendship." There is reason to madness. Anyway, I found this text very funny and I wanted to share it here and immortalise bits of this witticism on the blog. After all, the book I purchased is now a rarity. Horor and humour is a cocktail often used, but its effects are very uneven: sometimes it is a great mix, sometimes not. Often the humour gets in the way, or the horror elements are so powerful they make the jokes distasteful. In this book, even with strong elements of parody, it often hits the mark, as it does here.
Posted by Guillaume at 20:32