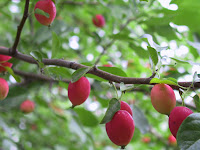 I am back from holidays since yesterday. They were short but they were good and more importantly they were needed. But today I am back in my routine and the obvious struck me: we are in August.

I have mixed feelings about this month. It gives me that back to school feeling. As a child, August was the last month of holidays and we could feel the start of the school year looming. I could physically smell school sometimes, which used to give me the blues. Even years after, I can still smell it. So since then, I get attacks of melancholia in August. I recently read that August is the hottest month of the year in England. It does not feel like it these days: since we got back it had been cool and rainy. Even when it is sunny and hot August feels like the end of summertime, like a fire that gets hot and bright right before it dwindles.

On the other end, August is also, to me at least, the beginning of harvest. It is time for me (or it used to be) to enjoy blueberries, to pick crabapples, to pick up raspberries (we used to do this in my uncle's garden, he had loads) and overall to prepare ourselves to the upcoming autumn. I find it easier to take August like this, as a transitional month to a season I love, than as the last days of freedom until the school year starts.
Posted by Guillaume at 18:09

I know what you mean about the August blues. I get them as well, and I know it's tied to my childhood dread of school. Strangely enough, they seem to go away these days as soon as the kiddos are actually back in school and the Halloween merch starts hitting stores!

It doesn't help that we've had days in the 100's here lately, with absolutely no real rainfall for the past several months! This is, easily, the worst drought I've seen in my lifetime, and I hope I never have to deal with one like this again!