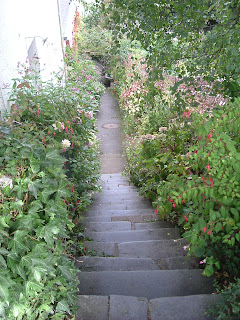 This is a sort of transitional post. I said it often before, this blog changes with the seasons, the pictures I put here (like every pic placed on a blog), witness the changes in the year.This picture was taken last year in Brittany, taken the very last day of August 2010. It looks more like summer on it that when I look outside the window. So this is probably the very last summery picture I publish here this year. And it is already looks anachronistic and out of season. See, this blog is called Vraie Fiction, I rearrange reality to turn it into fiction. It is genuine, yet it is fabricated, crafted. Reality is my first matter.

For me, autumn starts with the beginning of September, not on the 21st. So it is literally at the door, as it was when I took this picture. Stairways are not doors or gates, but they can symbolise transition and the passing from one world to another, one time to another. So this picture is fitting for this month which is about to end. We are, after all, in a transitional state.
Posted by Guillaume at 20:01

September 1st signals the beginning of autumn for me as well. I never consider the first weeks of September as summer.

I find that most seasons don't really start on the date that they're supposed to...