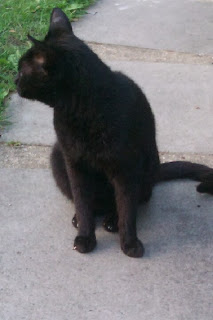 Last time I blogged about Odin was a little more than a month ago. This has been way too long. I have been blogging about cats inbetween and recently, but it is about time I give my readership a bit of news about my feline friend. And it is Wednesday, the day of his namesake. Not that there is all that much to say about Odin. He enjoys the bush as much as usual. He keeps being fed by the people here and he did gain a few pounds. Which is a very good thing: he was very skinny when I first met him. He is more fussy with food than when I met him: he does not eat as hungrily all the time and sometimes blatantly ignores the part of the dish he does not care about (usually wet food). But he prefers to be around here where he has exclusivity of love and cuddles (and food) than with his owners.Who actually don't mind. I had a drink with them (in the local Irish pub) and they are very friendly. They also had a talk with the evil witch that is the downstairs neighbour, the cat-hating witch and they calmed her worries, telling her a fib about Odin being home most of the time. The witch herself has been more discreet. She is still harboring malevolent ideas and wants to get rid of "that bloody cat", but she tired up every single resident here with her crusade (witch hunt?) and the temperature having dramatically dropped, she spends most of her time indoors, weekdays and weekends. I intend to have a talk to her, if she ever thinks about bullying Odin again, or those who love him. 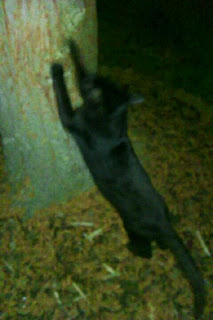 So Odin is not bothered by her, but I am a bit worried because it is now darker outside earlier and much longer. he is after all a black cat, so easy to miss. But that makes him also easy to hide from preying eyes (I mean witch's eyes). And I keep in mind that he is used to live outside. There is the cold temperature too, but he does not seem to mind either. Not when he is in the shrubs anyway. Even the rain does not bother him there. And the twigs he gets on seem to be a sort of fashion statement, or a social one about his wild nature. Odin in many ways reminds me of the song Moon Shadow by Cat Stevens. He is nocturnal, he is shadowy, he leaps and he hops, he follows you and is barely perceptible. And even though his fur is like a shadow, when he shows up I always think of the lyrics about the faithful light who found me. A song sung by an artist aptly named Cat Stevens. Now every time I listen to the song, I think of him. I know I uploaded Moon Shadow on Vraie Fiction before, but that was a while ago, and tonight I wanted to upload it again as an homage to Odin. I know it sounds really silly. An homage to a cat who has no knowledge whatsoever of homage, and sees me at best as one of his servants. Nevertheless, here it is:

When I was a teenager back in the age of dinosaurs, I adored Cat Stevens and his music. "Moonshadow" was and is still a favourite. Glad to see that Odin has a theme song now!

one of my most favorite songs though cat went weird.

@Debra-Odin certainly deserves a song of his own and this one is so fitting.
@Jaz-Great artist, but now and for a long while he has been a very little man.