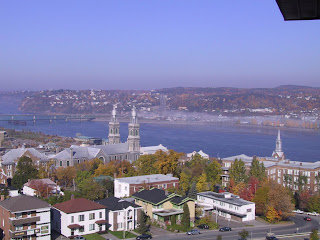 This is an anecdotal and utterly geeky post (be warned), but it is also in a way a post meant to celebrate the 175th anniversary of the region I am from. I mostly write about it in French, I thought I would do it in English too. You can see at your right a picture of Chicoutimi, the city I am from. It is now a borough of Ville de Saguenay, but this is a stupid, stupid, stupid rename. For any practical purpose, Saguenay is, in fact... Chicoutimi. As my readership knows already, Chicoutimi means "where the water is deep" in Montagnais. Freely translated into English, it could be Waterdeep, which is the name of a city in the Forgotten Realms setting of Dungeons & Dragons. I never liked Forgotten Realms. I prefer settings created by the players and DM. But as a player, I always thought this was an amusing coincidence. As you can see on the picture, Chicoutimi does not look one bit like a medieval or pseudo-medieval city, but it does have deep water.
Posted by Guillaume at 15:49

Interesting meaning of "Chicoutimi" -- didn't know before -- thanks!

My pleasure. There may not be much to say about the city now, but it has an interesting folklore.