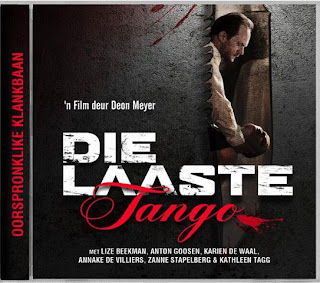 This may sound strange, but I am going to plug a movie that I have not seen and I have little chances to find here in the UK. Or indeed elsewhere. I am talking about Die Laaste Tango, the first movie directed by South African crime writer Deon Meyer. I have been following the shooting through the author/director's page on Facebook.It was released Thursday the 20th. The story is both a crime thriller and a tragedy, about a cop hunted by a serial killer he once beat up to an inch of his life and a woman dying of cancer. You can read more about it here. All fan interest aside, this is a fascinating starting point. And then I watched the trailer and I was sold. Like in the novels of Meyer, gruesome violence mixes lives alongside tenderness. Of course I cannot say if a movie will be great from a mere trailer, but we might have a at least a very solid film here, a thriller with soul. Have a look at the trailer and see what you think: