Of cats and crocs 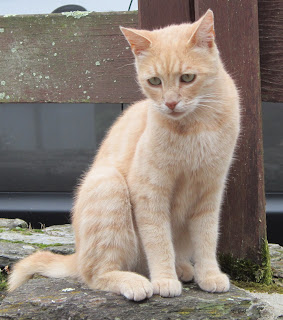 Sometimes there are news that make me despair of the human race, yet there are others that make me marvel about the animal kingdom. And when I learn about cats, it is to marvel at their intelligence, beauty, resilience, and overall superiority. Cats are superior creatures and I am convinced that one day, when mankind will have disappeared due to its own stupidity, the feline race will take over and this planet will be in good hands. Or paws.

Anyway, yesterday Matt Dillahunty linked on Facebook an article about a sicko who had murdered a cat of a Democratic Campaign Manager. It had got me very upset and gave me bad dreams. Wanton cruelty over animals, especially animals I love, always makes me upset. I learnt today in the Metro (your reference for pointless news when you are tired) that a cat had won a fight against an alligator over some chicken. It scared the alligator off! Somebody filmed it and it got viral on Youtube. Okay, this is pure trashy news. And after watching the video I am honestly not very proud of the human species I mean somebody should have worried about the cat. I didn't like the cheap laugh, the amused comments, the whole America's Funniest Home Videos feel and look, nothing in fact but the fearless, in your face attitude of the feline.It is the attitude that got the better of the saurian, not the cat's size, not its claws or fangs, but its stare, its fearlessness, its character.

I don't know exactly why, but I make an association with both stories. In Elmore Leonard's Maximum Bob, an ex-convict, pathetic criminal is compared to an alligator: stupid, mean, but dangerous. The sick guy who killed a cat is also a mean, stupid, cold blooded, cold heart saurian. He should be locked away for good. But hey there are cats. Smart creatures that can hold their ground. It does not mean they are soft: anyone who has seen a cat hunting can witness how merciless they can be. But there is no real meanness to it: cats do it out of hunger and for self preservation. And unlike crocodiles, alligators and other saurians (who eat their own offspring) they are capable of tenderness and empathy. And they get the better of alligators sometimes. I hesitated to upload the video here, but decided to do it anyway.

Funny video, although I have to say that alligators are not very good predators and are lazy reptiles, they mostly eat things that are already dead. I guess if it had been a crocrodile it would have eaten the cat!

I won't ever feel quite the same about my Mother's cat staring me down while I eat, as I ignore her and give her a taste after the meal. She might just turn out to be a fearless alligator gladiator in the disguise of a sweet domestic pet. I will make sure that I am super nice to her at meal times:-) The cat murderer should be made to work at animal shelters for the rest of his life! Grrr

The commentary and laughs make me cringe and the cat murderer - disgusting and pathetic.