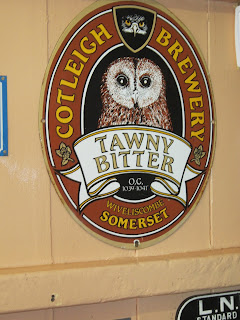 I try as much as possible not to judge a book by its cover and a beer by its label or name. That said, sometimes one gets curious by the appealing label of a certain beer. This was the case when I saw this little piece of advertisement in the steam train station of Totnes (or maybe Buckfastleigh) in Devon, promoting the Tawny Owl (or the Tawny Bitter as written on the image) from Cotleigh Brewery. I love all owls and I loved look on the image, dark and mysterious. I wondered if this beer still existed and had a colour similar to the bird of prey it takes its name after. 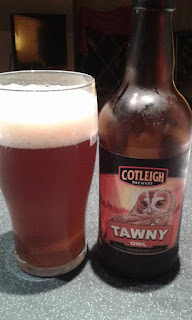 As I discovered, it does. Not only that, but the Tawny Owl is a proper bitter, just dark enough and with plenty of character. For once, its label didn't lie. Because as I found the beer at complete random in a garden center my wife and I sometimes go to. It was a couple of months ago, when I had completely forgotten the picture I had taken in Devon. And there it was, with other products of Cotleigh Brewery, all with names of birds of prey. I bought two for home. I will blog another time about the other beer, but the Tawny Owl has so far been one of the best discoveries I've made this year and I cannot wait to buy some more and drink it again. The brewery is from Somerset. I think we might go there one day on holidays.
Posted by Guillaume at 12:05

wow, thats good to know,, really good graphics on that label,,
just the name and image on this would draw me in!