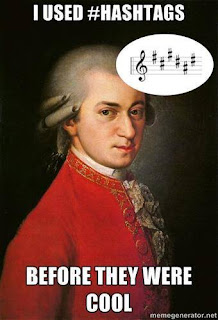 I found this meme a while ago on Facebook and was wondering of the right moment to use it. And now is the right moment. it is funny and it is of course absolutely true. Mozart used hashtags and to great effect way before hashtags were cool. He was ahead of his time. Now, he is as modern and relevant as he was then. I decided to share it tonight as my wife, who is in the local orchestra, gave a concert yesterday where she played, among other things, the overture of Le Nozze di Figaro. So it is time to share some hashtags in music. See if you can identify them in the overture.