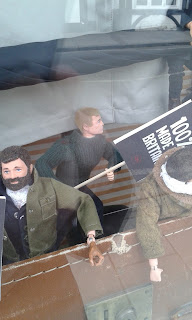 These figures of men are in the shop window of one of the local independent (and expensive) businesses that are still standing. It sells menswear. Expensive menswear. British menswear, as many of the figures proudly display: "100% Made In Britain". They all look strong and to be honest some look a bit gay. Maybe it's the foppish scarf some of them wear, maybe the beards, maybe it's because there are no women whatsoever among them, but anyway. Some look quite sinister too. This one at the back for instance, holding the 100% sign for instance: he has a scar on his face, from his cheekbone down, which I don't know if you can see. He looks like a goon from a Bond movie, or an old pulp magazine. Kind of cool, actually. But what struck me was his jumper. Dark green, with a hunter/military cut it looks surprisingly similar to the out of price olive green jumper I found at Heathrow back in 2013. Been obsessing about it ever since. I checked on the shop's website if they had the equivalent man sized, but no. They don't have the elegant military jumper that I would love to wear in autumn. Because it would really fit that season. And I know: I am longing for autumn already and April has barely started. But anyway, the shop only has suits, shoes and shirts. No comfy jumper with leather patches on the shoulder. Maybe it is all for the best. 100% Made in Britain usually means out of price for people living here.
Posted by Guillaume at 19:09

Those look like GI Joe dolls (sorry, "action figures") to me. That would explain the scar(s), beards and general thuggish look to them.

They are Action Men actually. My wife told me.