The official beer of Halloween 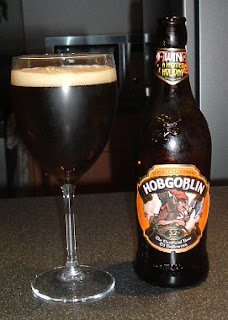 I cannot believe I never blogged about Hobgoblin before! Well, I did, indurectly, but I never wrote a whole a post about maybe my favourite English beer. Shame on me. This picture was taken a long time ago, back in 2008, the label on the bottle is now slightly different, but it gives you an idea.

I first discovered the Hobgoblin in Montreal, around that time of the year, at the SAQ on Saint-Denis. Strange than a British microbrewery had managed to find its way to Québec. I loved it then, I love it now. I even won a t-shirt of it in a draft, with the famous hobgoblin. I discovered later on, when I came to England, the Wychwood Brewery and its other products. I tried most of them at least once, although for some I was not quite sober enough to appreciate them. I love the unapologetic attitude of the microbrewery, the firm stand they take for traditional real ales, the way they mock lagers in their advertisement. "What's the matter, lagerboy, afraid you might taste something?" is now one of my favourite mottos. But especially, I love how they use folklore to brand themselves. So it is my favourite beer here, or one of my favourite. And they now have labeled themselves, or self-proclaimed their beer the official beer of Halloween. It might sound arrogant, but in a country that does not celebrate it as it should, I am glad there is a beer that wants to be part of the season. In Québec,  my personal beer for Halloween is St-Ambroise Pumpkin Ale. Here, it is the Hobgoblin.
Posted by Guillaume at 21:49

Wow, surprised that I haven't seen this at any of the hippy-dippy alterna-markets that I shop at!

This has been the worst year ever for Halloween beer here. St. Ambroise's Pumpkin Ale had problems with its shipping, so none is available. Even some of the Halloween themed beers I would occasionally find don't seem to be around. Only one locally-produced beer , and it's horrible. Someday, Hobgoblin, someday . . .

What a unusual, and unique name for a beer. I can imagine it being drunk in smoky, dark taverns by rather dodgy looking characters or a wizard or two:-)