The legend of Jack O'Lantern (part 1) 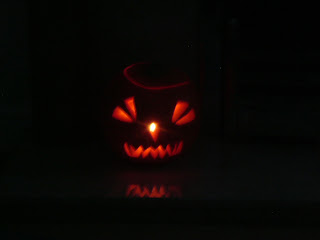 So here is the first part of my take on the legend, as have promising, I hope you enjoy, it's a work in progress...

Jack was a very wicked Irishman, known for being a drunkard, a thief, a trickster and overall an unpleasant man. A sinner, in Catholic terms. It is surprising that Jack never became a werewolf from all his wickedness as a living, but he suffered a fate far worse than what scientists called lycanthropy.

One night that Jack had drunk too much (one of many nights, he never spent much time sober), he was out of money but still thirsty. As he was still thirsty (Jack never felt he could be drunk enough), he decided to use one of his old tricks to get a few pennies: begging. With his dirty grey beard and his ragged clothes, Jack knew he looked like a beggar anyway.

There were not many people in the streets of the little Irish village on that dark October night, except, at a crossroad, by a dim streetlight, a handsome young man in expensive clothes. Even drunk, Jack could tell the man was filthy rich, so he decided to try for the stranger's compassion. In the dim light, Jack could see the features of the man more easily: he was clad in rich dark clothes and was holding in his right hand a burning match that didn't seem to consume.

"Can you spare a penny my lord?" asked Jack.

"I will lend you more than a penny, Jack, replied the man with a sly smile. A golden coin, in fact, enough for you to pay all the whisky in Ireland, if you can drink that much, but later I will ask for something in return, as payment. Nothing comes for free in this world, even to a thief."

In his drunkenness, Jack did not notice that the stranger had called him by his name. And Jack did not mind being called a thief, not even for a penny, let alone a golden coin and maybe all the whiskey in Ireland! From his left side pocket, the stranger produced the golden coin, which he threw at Jack's feet. Jack kneeled down, ceased the coin, thanking the man profusely.

Jack got very drunk that night, and the night after, because of the stranger's generosity. He did not drink all the whiskey in Ireland, but plenty of it, and lots of stout, and cider and other alcohols which names he couldn't even remember. At the end of the week, Jack was painfully trying to treat the worst hangover he ever had (he had even started drinking water, a liquid he always hated), when the strange man came to ask his due.

It was on October 31st, the evening was falling and the man was standing at the same crossroad. Jack was walking, hoping that the autumn air would cure his terrible headache. He recognised the stranger. The man hailed him:

"I will if you don't speak so loud! My head is killing me."

"Your current suffering is nothing to what's waiting for you where you are going. Last week you accepted a coin in exchange of payment. Tonight I am here to claim your soul."

Hearing these words, Jack knew who was talking to him. Drunk, Jack could easily get in trouble, but sober, even sick, he could be shrewd and cunning. He knew that even the smartest creature had an Achille's heel, and that the Devil was known to be vain.

"I know who you are claiming to be, said Jack, but why should I believe you are Old Nick? I mean, you have a golden coin, so what?  That's hardly proof of anything."

Hearing this, Satan entered in a diabolical fit of rage.

"You fool! Doubting me is as bad as doubting the old man upstairs. For this you will suffer."

"Well, according to you, my Lord, said Jack in a mocking tone, I am already going to hell. What fate worse than this one is expecting me, if you are the Devil? If you are, just show it by, I don't know... Producing a golden coin is easy enough, what about turning into one and getting into my pocket?"

So that is why Satan did. In a few seconds, the stranger turned into a mist of fiery red and black smoke and shrank into a golden coin that flew into Jack's pocket... Where a little silver crucifix was waiting for him. Jack had stolen it from a priest. He thought he could have melt it and sold it and was he glad he had not done it yet. The Devil was trapped. Satan cursed himself for being so proud and for letting a mere mortal get the better of him. But there was nothing else he could do but beg Jack to free him. Jack did, but only after he made the Prince of Darkness swear that he would not claim his soul for seven years...
Posted by Guillaume at 19:51

I never knew the tale of Jack O' Lantern since I live in a country that hasn't celebrated Halloween until recently, and even then not widely. I first encountered him on your blog, and I am enjoying your take on it. Can't wait for more.