The legend of Jack O'Lantern (part 2) 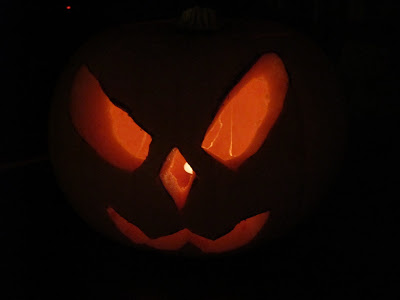 Part 2 of my take of the legend (pat 1 here), and what did I get myself into? Maybe we can wait for next Halloween for the rest, it is taking a lot of space and burying other posts. Anyway here it is...

Seven years later, when the Devil came back to claim Jack's soul, Jack was no better than when he first met him. He had kept on going his wicked ways, unrepenting, and deserved Hell more than ever. Satan was waiting for him at the end of a village, by an orchard, this time persuaded that his prey would not slip through his grasp.But desperation make men cunning, and Jack had always been a cunning man. He had tricker the Devil once by appealing to his vanity, now looking at the apple trees around him, he decided to appeal to the Devil's gluttony (and his fondness of apples, which alledgedly dated back from the Dawn of Man, when he had tempted Eve).

I don't know exactly how Jack managed to convince the Devil, what words he used and which tone he had, I am not certain that as I am storyteller I would be able to depict faithfully what happened but nevertheless, the Devil, because he was gluttonous or because he liked the flavour of apples or for some nostalgic reason dating from his time as a snake in the Garden of Eden agreed to climb up that tree and pick up some apples. Now, going up and down a tree is easy for a man, a snake or a fallen angel taking the appearance of a man or a snake, but Jack had carved with his pocket knife (stolen a few days before) a cross at the bottom of the apple tree and Satan was stuck there. Jack had fooled the Devil twice. Satan cursed and threatened, but was powerless to do anything else. Jack agreed to destroy the cross only when the Devil promised never to claim Jack's soul ever again. Jack then scratched the cross away. Before he left to go back to the Underworld, the humiliated Prince of Darkness gave this warning to Jack:

"So you fooled me Jack, and just for this you deserve to be granted your request. But do not fool yourself: you have chosen your fate now, just as you had done so in your life. I will keep my word, but you will learn to be weary of Lucifer when he keeps his word."

Jack thought little of it at the moment. He had, after all, got the better of the most powerful being after God and he felt invincible. So he carried on his wicked way, unafraid of the fires of Hell, until after years and years of excesses his body could not take it anymore and died. At the Gate of Heaven, Saint Peter refused him entry. Jack was sorely disappointet: had he fooled the Devil for nothing? He plead and plead, until an impatient voice was heard saying: "Depart from me". Jack did not overstay his welcome. Saint Peter curtly pointed him in the direction of Hell, which Jack found easy enough to find (however tortuous was the path, it was rather large, and he felt he had known the way all along). He arrived at the Gates of Hell at dusk. The Gates of Hell was then at the end of a field of turnips. It was very cold outside and very dark, but through the keyholes Jack could see and feel the hot fires of Hell, which seemed almost welcoming after the long way down. He knew he was in a familiar place, he knew he belonged there. Yet the Gates did not open.

Jack shouted, plead, begged as he used to do so convincingly as a mortal, but the devils on the other side of the door would not accept him. He stayed there ages and the night was getting darker, when a terrible voice was heard.

"So the Old Man wouldn't let you in either?"

"Oh My Lord, it's you at last! I am sorry we had this silly misunderstanding a while ago, but I discovered I was wrong. People often told me to go to Hell when I was alive, this is where I should be as a soul, I think, and besides, didn't you claim my soul so many years ago? I am here to give it to you, freely."

"But I swore never to take your soul, Jack. And I told you I would keep my word. Your soul has no value to me anymore. This is where you belong, but you willingly and rather foolishly refused to enter there when you had the chance. If God doesn't want you, why should I? And what satisfaction would I have to torment you forever? Your torment, Jack, is where you will carry it. You shall spend centuries and centuries on this earth you did not want to leave as a mortal, but you will not drink anymore, you will not enjoy life, sinful or virtuous, you will until the End of Time walk this earth as a shadow, cold, weary but condemned to go on. Now depart from this place."

"But my lord, it is dark and I wouldn't know how to find my way."

The gates opened slightly. Jack could now see the Lord of Darkness, or a glimpse of him. He was a huge, towering figure, winged, who seemed made of burning embers. He threw a burning piece of ember at Jack.

"Take this, Satan said, put it in one of those turnips and use it as a lantern. The name the Old Man gave at me at the beginning of time was Lucifer, the Lightbearer. May this flame bring you light, so you shall see what you can never have anymore."

Jack took the flame in his ghostly hands and placed it in a turnip. He managed to fins his way back to the land of the living, travelling mostly at night. Since then Jack placed the flame from Hell in a pumpkin (he found it in America). You can still see him on cold autumn nights, travelling around the world, hoping to find a road that will lead him away from the land of the living.
Posted by Guillaume at 21:38

What a wonderfully spooky tale to match your spooky Jack O' Lantern. I almost felt that I was tramping those dark, endless roads with him towards the end...