Jack and the Devil 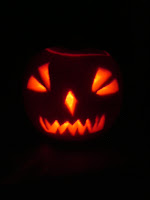 I thought about yesterday's post, when I mention that Icame up with my own version of the Tale of Stingy Jack. And then it struck me: it could be made into a play or a short film! It must have been done before, but it would work beautifully. The story is short, straight to the point, it has great characters and a classic ending.

As my long time readers might remember, the Devil is a role I always wanted to play. Something that is quite interesting in the story of Jack O'Lantern is that the Devil gets fooled. Like a new reader said, the trickster gets tricked. It happens in some other tales, but what makes it really unique is that in the end Satan gets the last laugh... by keeping his word, not by deceiving. Ironic for someone that is known as a deceiver.
Posted by Guillaume at 11:15

Y'know, I never did think about the irony of the Devil having to keep his word to get one up on Jack! Gives a new layer to the story for me!

@Anonymous-I'm glad you enjoyed it. I think Jack was really such a pain, I sure wouldn't want him in Hell if I was Satan.
@The Gill-Man-It is a much more complex tale than it looks like, with echoes of the Faust legend I think. I will try to tell the story in my own words here.