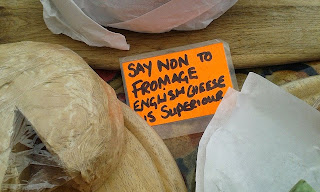 I took this picture a few weeks at the local market for local producers. They hold this market at the last Saturday of each month. It comes from the cheese stand, held by an elderly English cheesemaker, one of the most English Englishman I have seen in years. He was full of English commonsense wisdom: he was making himself a delicious breakfast (because "you can't start a day without a proper English breakfast"), composed of one goose egg, two sausages, two rashers of bacon and a cup of tea (because "you can't have a proper English breakfast without a cup of tea"). Tokens of English wisdom which are now great unknown lines. But it is his pride as an Englishman for English cheese that struck me.

He sure knows how to sell his stuff and I did buy far more cheese than I expected simply because he was so darn convincing. Especially a cheddar that tasted a bit like parmesan ("only better" he said), but unlike Parmesan was suitable for vegetarians (my wife could thus eat it, although she did not like it much). And there is this jab about French cheese. Gotta love English pride. I don't think English cheese is superior as much as just as good as French cheese, but there you go. The man sure knew how to make a stand. I still wonder if the u in superior is a voluntary mistake to make the word sound more English. In any case, notice that he also makes a distinction between cheese and fromage. And you, where do you stand in this debate? Do you agree with the statement? As I said I don't, but I admire the man all the same. He reminds me why I love England so much.
Posted by Guillaume at 13:30

When it comes to cheese, both sides of the canal have some fantastic varieties, as do we up here in the North. We always have old cheddar and Stilton on the x-mas table, but after dinner (or even substituting dinner...) I will always go for chèvre and soft ripened French cheeses. For sandwiches nothing beats the 1-2 year-old hard Swedish cheeses. I could go on and on, I love cheese!

He's quite right about the English breakfast! I think that France and the UK can each claim to produce exceptional cheeses and we eat cheese from both countries. But the sheer range in France is amazing. Mind you, when we lived in France I wasn't brave enough to try some of the more strange looking and smelling ones!

i always go english for cheddar and french for my soft ones.

I couldn't care where it comes from, I love cheese,,, taste is all that matters,,