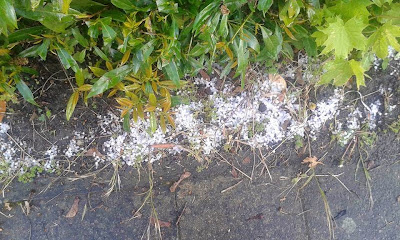 Whatever I said about Summer coming recently, I take it back. May is still a cool, even cold, nasty Spring and it actually looks sometimes like an autumn that is ending. We could still be wearing heavy jumpers and winter coats with scarfs and if it was not for the green in the trees it would feel like October or even November. Okay, maybe not November but definitely October. An October like I love them. Except that we are in May. And a May like this, especially when it is near its end, well, it kind of sucks. 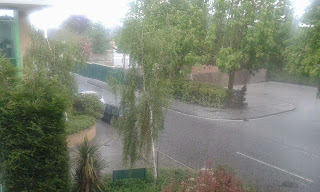 And today, we had hail. A lot and a lot of hail. There were two showers of rain, one that was loud but short, and a second one where it poured for what felt like ages. I took these two pictures at work, one when it was pouring down, the one on top during my lunch break later.You can see how big the hail is. Like chunks of salt. And, while the second picture is blurry, taken from the first floor window at work, it also gives you an idea of how dramatic the hail falling was.
Posted by Guillaume at 20:04

i sure don't want to see any hail here right now. i just planted all of my vegetables!

I'm shocked that you had hail "down south" and we had sunshine. Usually it's the other way around!