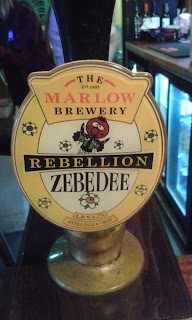 I have often plugged beers from Rebellion Beer in Marlow. Their products can be found in pubs all around the South East of England. They make among my favourite beers, especially the seasonal ones (see this post about their winter one). The one I am blogging about tonight is not my favourite among the ones they make, or the kind of beer I would usually have, but it is lovely on a warm Spring day or even a Summer day. It is called the Zebedee. The name is vaguely Biblical and I guess since it is their official Springtime beer, it is reminiscent of Easter. Or maybe I am reading far too much in what is in essence just a name. 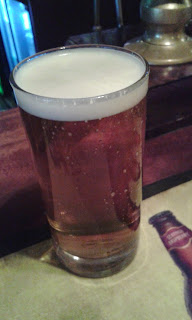 Still, for whatever reason it is their Springtime beer. I think it would fit Summer even more. Because Spring in England, just like many places, can be cool, of not cold, and a blonde beer with a fresh taste suits the warmer days of Summer far better. The Rebellion website says it is available from March until April, but I have seen it being served in May as well. For a blonde, the Zebedee has a good deal of character, another reason why I would rather have it in Summer. I prefer it to their Blonde, which is too light for my taste. During summertime I have their Smuggler (more about it on this post) or sometimes their Mutiny. Still, in the occasions when I am in the mood for a blonde that is not insipid, I go for a Zebedee if it is available.
Posted by Guillaume at 20:30

Beers from local micro breweries are often such a surprise and such a treat. We have one up here based in Glasgow too called BrewDog but very few outlets sell it. Fortunately, my favourite art house cinema in Glasgow sells it.