A portrait of Stannis Baratheon 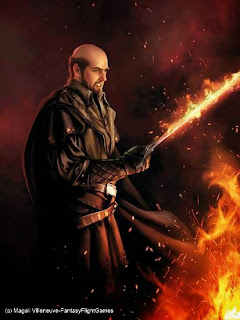 Today, as I am on a bank holiday Monday and have plenty of time to spare and it is cloudy outside, I am doing a bit of a medieval fantasy marathon.So that means I am watching Game of Thrones episodes (I just finished watching the last one) and I might watch the last Hobbit movie (although I was underwhelmed by the second one). If I could, I would play Dungeons&Dragons as Game of Thrones gets me in the mood for it and it would be a perfect day for gaming. But instead, I am blogging and sharing my geekiness to the world.

So today I have decided to upload here a portrait of Stannis Baratheon, drawn by artist and fellow Quebecker Magali Villeneuve. I did it before for her portrait of Tywin Lannister. Like for Tywin, I started appreciating the character of Stannis because of his portrayal on the show by actor Stephen Dillane. Stern, ruthless, even merciless, but with a sense of justice that is sometimes misplaced, Stannis is a fascinating character. I would love to have one like him in some of our D&Dr games, either as a friend or foe. I think Magali captures perfectly the hardness of the man in this portrait.
Posted by Guillaume at 14:58