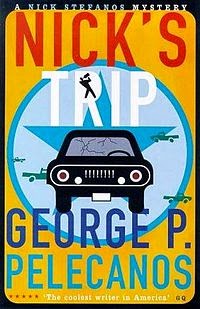 Because this the season to be reading, I am giving you again a reading suggestion for Christmas. This one is from one of my favorite crime writers, George Pelecanos. It is Nick's Trip, which is related to Christmas not merely because its main character Nick Stefanos shares his first name with Santa Claus (as well as Greek origins). It is also set during Christmastime. Crime fiction set during Christmas time always has a soft spot in my heart. It means blood on snow, the ever ominous presence of death when life is celebrated, danger, you name it. It also means crime drama set in time of excesses, alcoholic or others. It is simply a brilliantly atmospheric time and setting for crime fiction.

The plot is in fact two stories wrapped in one: Nick Stefanos is asked by his old friend Bill Goodrich to find his wife April, while in the meantime trying to solve the murder of a friend. It is a modern take (it was published and is set in the early 90s) on the classic private eye genre, but Stefanos is stripped from the heroic stature of the archetype: he is a drunkard and a loser, although he does know how to write: the novel is written at the first person perspective. And yes, it is set during Christmastime.
Posted by Guillaume at 22:22