An oak, a sword and a Norse god 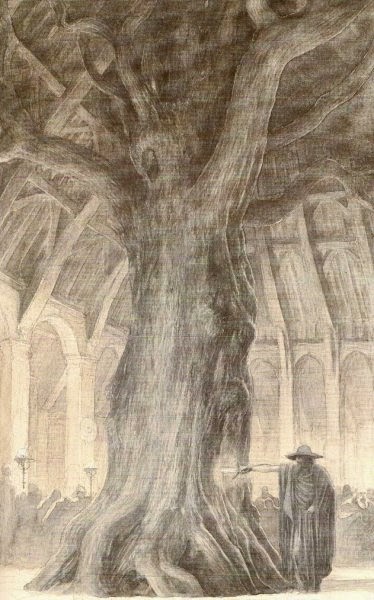 As Christmas is coming, I am getting deep into its Pagan roots, and more precisely its Viking elements. So yes, yes, this is actually a post that is about Christmas, troll the ancient Yuletide carol everyone. I am reading this book about the Völsunga saga. And there is a particular episode of the saga that has some Christmas overtone. You see it illustrated by Alan Lee on your left. A beautiful, powerful image. You see Odin Allfather, in his usual disguise of an old wanderer, sliding a magical sword in the trunk of a tree. It is often said to be an oak tree, but the word used for oak is often a generic for tree, or so I read. The tree is named Branstock, and it was at the center of the house of the Volsungs. Odin offered the sword to anyone who could pull it off the tree. Prince Sigmund, the son of Volsüng, who was to become the father of the hero Sigurd, was the one who succeeded to pull it off.

Now, of course the first thing you can think of is King Arthur, but it has many Christmas elements. There is the tree in the center of the hall, for one. I always thought Christmas trees were descendent of Yggdrasil, and Branstock was meant to be a direct descendent of Yggdrasil. Odin himself is a possible ancestor of Santa Claus, who sees all, asserts the behavior of men and also is a gift bringer, like in this story. A gift he places under/in a tree. So there you have it. A Yule story to tell your children, grandchildren, godchildren and to read.
Posted by Guillaume at 20:25

I think you're stretching it, but okay! Are you a fan of Wagner's Ring Cycle too?

I am stretching, but barely. I am not a big fan of Wagner, actually.

Who was it who said Wagner is not nearly as bad as it sounds? Getting old, can't remember.