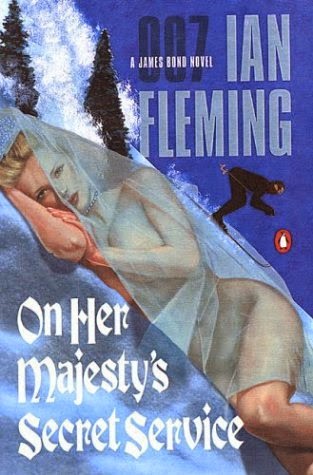 As Christmas is getting closer and closer, I am suggesting to my readership both a novel and a movie on your list of Christmas entertainments.I am talking about On Her Majesty's Secret Service, which is set during Christmastime. I already plugged the novel two years ago and recent developments regarding the next Bond movie made me revisit the novel. In other words, Ernst Stavro Blofeld, Bond's nemesis and primary antagonist in both novel and movie may be featured in Spectre. Rereading parts of the novel, I am more and more convinced that this will be the case.

So why is the novel such a great Christmas read? Partially because of the setting, of course: snowy Switzerland. Because of its key element of violence, which illustrates the darker aspects of the holiday. Blofeld may seem like a benevolent aristocrat, a Santa Claus of sorts, he harvests in fact a very sinister plan. Christmastime is not only about the Nativity, it is also about the murder of the Innocents, triggered by the paranoia of King Herod, about troubled times bringing up an uncertain future. Traditionally, it is also a time of Pagan excesses and gluttony, something that is illustrated again in Blofeld's scheme: he wants to destroy livestocks through biological warfare (his first "victim" in the novels is the production of British turkeys). Through a very modern, even contemporary theme, you have in fact expression of centuries old symbols. Anyway, it is a great read, and if you don't have time to start it now, give yourself an evening to watch the movie adaptation. Here is a scene from it, when Blofeld reveals his plan to Bond.