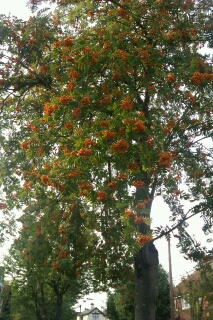 I have decided to upload this picture of a rowan tree, which I took yesterday on my way back from work. It is of course the picture of a rowan tree. I blogged about rowan trees before, as I developed a certain fascination for them, as they are associated with mythology and folklore. They are supposed to be a protection against witches, which is great, as there is one that lives nearby (I am talking about the evil neighbour who hates cats of course). We have one at my parents' garden which is absolutely magnificent. There are plenty of rowan trees in the little town where I live, I have also seen many in Windsor. It might be a tree typical of the English south.

It is also one of the signs of the upcoming autumn. Trees obviously can be used to determine whether a season is coming or not. I use them to read the signs of changing seasons anyway, like I did recently with a fig tree. When a rowan tree gets his orange coloured (and as far as I know inedible) fruits, it means that autumn is near. When autumn is in full force, the leaves should take the colours of a wild fire. There was also another recent sign of seasonal change: yesterday evening, as I was walking outside, I could smell smoke and fire. Not the smell of a barbecue, typical of but the smell of a bonfire, or a small home fire that was coming from a chimney. There is summer smoke, and there is autumn smoke, both smell differently, something about the context and the atmosphere. In any case, I was happy to see these new signs of upcoming autumn.
Posted by Guillaume at 21:24

someone needs to plant a rowan on that nasty woman's property!Chase her away, begone with her evil self!

I believe they are also called Mountain Ash. Lots around here. All currently bearing fruit :)

They grow well here in Alberta too, except we call them mountain ash trees. We have a couple in our yard.

Oh oh. My Rare One is going to cut one down this weekend. She says it's a pain in the ass.

Wow, I never thought this would attract so many comments. Thank you all.
@Laurie-I intend to have a talk with her.