The incipit of Goldfinger 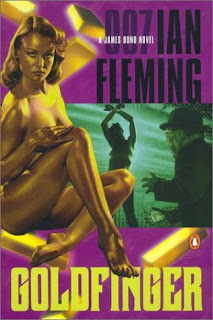 An incipit, as people who studied literature know, is the first sentence of a novel. I quote them on Vraie Fiction from time to time, because some are simply great introductions to great novels. This one is from Goldfinger. It is a flawed novel from Ian Fleming, some people say the movie improved upon it (I think in some ways it did, in some other it did not), but it is nevertheless very well written, full of atmosphere and character. And here is the incipit: "James Bond, with two double bourbons inside him, sat in the final departure lounge of Miami Airport and thought about life and death." What follows is a reflection about the murderous aspect of his job, triggered by the memory of fight a few days earlier with a hitman sent to kill him. The first chapter makes in itself the novel worth a read.
Posted by Guillaume at 22:06

when goldfinger came out, my father refused to let me see it or any james bond movie. to this day i have never seen one of them. very very strange since i mostly did everything my father forbade me to do!

You are missing something.