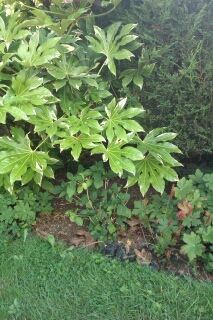 I hope my readership does not mind if I tease it a bit without showing my feline friend on a post that is about him. This is a picture of Odin's bushes, the dwelling place where he comes around in the garden.He has owners, but I think he spend most of his nights there, sleeping in the bushes. Every morning, or most mornings anyway, when I go to work, he shows up, his fur full of twigs, for an early cuddle. Every evening, or most of them, he is shows up from his hiding place, the same bushes, and asks for a cuddle and of course some food.Today is a bank holiday so I can feed him during daytime. I know he has owners and maybe I shouldn't feed him, but as they have a little menagerie at their home, with a dog and two other cats, and especially as Odin always seems very hungry, I do like most of the neighbours here and feed him.

One of the neighbours the one I mentioned here, is considering putting a small house in there to keep him safe from rain and colder weather. He and his wife already placed a bowl to fill with water so Odin could drink when he is thirsty. Of course, the evil witch (whom I sometimes refer to by another name) who thinks she runs the garden and hates its feline dweller, took it away a few times. She spent a lot of time gardening around and in the bushes two or three weeks ago, trying to reclaim the nest as her own property, but it only kept Odin away the time she spent there. Well, she will be granted her wish in December, until then Odin is welcome. Interestingly enough, his namesake had a dwelling place where he looked at the world around him, an eagle's nest at the topmost part of Asgard. Although this is much closer to the ground, it is pretty much Odin's nest now.
Posted by Guillaume at 11:53