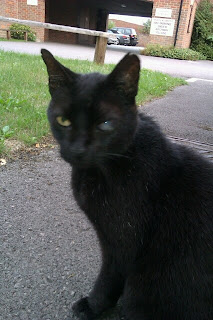 I have not blogged about Odinsince a fairly good bit, as I thought about diversifying the topics on Vraie Fiction. But I know Odin is maybe the favorite topic of this blog, so here is a new one, the latest episodes in the Odin saga. Here is the most recent picture, where I miraculously managed to get his lovely feline face. Odin is very camera shy and always turns his head, often even moves quickly out of the frame, when I try to take a picture of his face. But yesterday, I managed to take one where you can see his eyes. You can see now why I baptized him Odin. He is very akin to his namesake, even though Odin I think had lost his right eye (according to this book at least). Reading the WIkipedia article, it seems that the Vikings were never clear about which eye the Norse god had lost.

So this Odin, my beloved wandering cat, has now been adopted (or has adopted, as cats do), by the whole block. I discussed feeding time with a couple of middle aged people who are also cat lovers and do enjoy feeding him. I say the whole block, except one person: there is a malevolent old lady, who took over the garden when she moved in (even though there is a private business paid to do the gardening), and has been bossing the place around since then, who thinks Odin is a nuisance and has been chasing him down the road when she is gardening. I was referring to her when I wrote this post two years and so ago. I was naive enough to say people were all nice here, even the irritating busybody ones. Oh I was so wrong! Just like I was wrong in my preconceived idea that old witches loved cats. She has been very rude to pretty much everyone showing kindness to Odin. She is my new nemesis. Otherwise, everybody loves my furry friend. The name has not caught up yet, but I think it will. He even made himself at home in the bushes in front of the block, where he hides most of the day, except when he is treated with foods and cuddles. It seems like a safe place when it rains.

I have also decided to take Odin to the vet next week, to see: 1)if he has an chip and 2)if something can be done about his eye. One of the nice neighbours offered me to pay a part of the visit and the possible treatment. If he does have a chip, and thus an owner, I would be very sad, because I would have to give him back (and explain this to the people who fell in love with him here) nevertheless it would be the right thing to do. Even if he does not have an owner, I will probably need to give him up at some point to the Cats Protection Society. As I suspect he is half blind, I won't let him out in the wild indefinitely. But until then, well, sweet Odin is here.
Posted by Guillaume at 21:16

I love hearing about Odin. You can write about him every day so far as I'm concerned. If you do ultimately take him to a cat shelter, please make sure it is a "no kill" shelter. He is not likely to be adopted, so sooner or later at a "regular" shelter, the welcome mat would be withdrawn, if you catch my drift. And we don't want that for Odin!

I think he is very handsome, love his name, I hope he finds the perfect forever home,

Lovely photo of Odin. I hope everything turns out well for him, despite the nasty neighbour. Why does every neighbourhood seem to have someone like that? :/

I shouldn't feel shy to blog about Odin, the posts are always popular.

I'll add my voice to the chorus of folks who enjoy hearing about Odin! Love getting a good look at his face, after all this time!