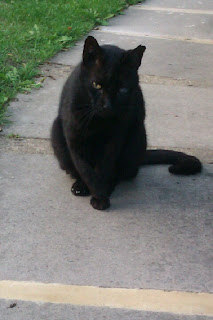 Well, since we are Wednesday, Wotan's Day, I am publishing another post about his namesake, Odin the wandering cat. Since you all seem to love Odin, I am sure you will not mind. Not that there is much to tell, to be honest: Odin is still around, comes out of his dwelling (the shrubs by the block) every morning, full of twigs and dead leaves, to greet me and every evening he shows up to welcome me back. He is not as camera shy as he used to be, as last weekend he stared at me and did not flinch when I took my phone out to photograph him. That was after I fed him his dinner, rabbit stew and biscuits. He was not keen on cuddles and needed some "me" time, it seems, as he moved away from a few steps, licked himself thoroughly, then looked at me, with his very unique eyes, in something that I identified as irony. You tell me if I am right, but on this picture he seems to be telling me I'm a sucker. He is right of course, but he's so darn cute.

And as a bit of news, one of the neighbours told me he had a conversation with the witch I mentioned here. Basically he warned her not to take away (as she had done in the past) the bowl of water for the cat that he and his wife left in the bushes. He also said that the cat was loved by many and that he was doing nothing wrong and hurting no one, and that the fact that she decided to do the gardening did not give her the right to run the place as her own. She tried to justify it, and justify her feeling of entitlement over the garden by saying: "Oh, but you are just renting." He replied: "We have been renting for nine years here, and our rent pays for this garden too." I would have told her the block is not a boarding school and that she is not a headmistress and that renters are also people to treat with respect (not sure she understands that word). Nevertheless, the answer of my neighbour is worth a mention as a new great unknown line. His second one, in a row. Oh I love the humiliation and little defeats of evil witches! And Odin, being maybe the Norse god in disguise, is a blessing to the whole neighbourhood.
Posted by Guillaume at 20:34

I think he just might be that, a blessing,

Odin's warriors will go into battle for him.

If you don't write a book you are missing a golden oportunity.

This woman is SUCH an idiot! Does she not realize how many pests that cat probably kills in that garden? There are all sorts of rodents that can destroy a garden, and Odin is probably keeping them from doing so. Whatta C-U-Next-Tuesday!

I knew this post would be popular.
@Laurie-He is a blessing.
@Debra-There's a lot of people ready to go to war for him, that's for sure.
@Gwen-Really? I wouldn't know where to start.
@The Gill-Man-I call her many names, this one among others.