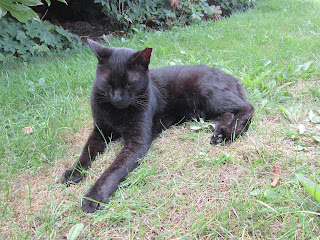 Well, it is Wednesday so it is just an excuse as any to talk about Odin. I thought it was the end of my time with my feline friend. I thought Odin, now that his owners had found out about his visits to the neighborhood (well, in fact it is the same neighborhood, as they live in the street perpendicular to this one), they would just spend more time with him and that would be it. Only two days ago, I titled my post about Odin The end of the Odin saga?. Well, I was wrong, at least for now.

In fact, not much has changed. Odin is still around, in the morning when I go to work, in the evening when I come back. It was raining tonight and he was still there.He still rubs my feet, he still asks and receives treats, from me and from the neighbours. Except the evil witch I mentioned here, who has been passive-aggressive to everyone who gave cuddles and treats to Odin. She keeps on bitching about him to anyone who would listen, usually passersby, as no one in the block listens to her anymore. Like one of my neighbours said about it: "There is nothing wrong with being compassionate." This is wise, and good enough to be a great unknown line. People here understands this, including Odin's masters. And this is on this note that I want to end this post.

Sounds like my mother-in-law! Maybe she has a double in England! :D

Believe me, your mother-in-law cannot be like her, bu any stretch of the imagination! She is a childless spinster, for one, and she dislikes virtually everybody. Every living creatures.

Clearly, Odin is his own cat. He comes and goes as he pleases, the master of his ship.

Guillaume, you write about the greatest unknown lines.