The end of the Odin saga? 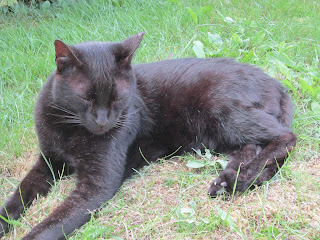 A warning to everyone who love him: I might write more about Odin the wandering black cat, but not as much as I used to. It was a very eventful evening. So as I had mentioned last time, Odin went to the vet tonight. He was a very good boy. A few things were confirmed: he is a boy, he was not a wild cat, even though he was an outdoor cat, he had a chip... but it was a foreign one, the code being much shorter than the British codes and it being not in the vet's database. My imagination ran wild and I started imagining Odin coming from Scandinavia or Russia or something. As if he was really the Norse god in disguise. Anyway, overall it was very reassuring: Odin is a healthy cat who spends a lot of time outside because he loves it and even his left eye, although suffering from something, can still see.

Then, back home, as I was taking Odin out of his cage, a couple walking by and asked if this cat had a weird eye... And it turned out Odin was theirs. They are really friendly people, the man is American and the woman is French, they are from Florida where they bought Odin and two more cats and a dog. So Odin is really a wandering cat, and a well traveled one. Except he is not from Scandinavia, but from Miami. His "real" name is Homer, not because of the Greek poet, but because they found him at Home Depot. It is a good name, it is a fitting name too, but I still prefer Odin. So anyway, in a nutshell, the mystery of the black cat is now revealed: Odin is just a home cat with Bohemian owners, who likes his bit of independence and is friendly to everyone and not shy to accept people's generosity, especially in food form. Their house, by the way, was their house I mentioned before. I was glad Odin had a safe place to go. I wonder why he spends so much time here. But I need to end this post, and this saga, on a sad note (can a saga end on a good one?): Odin and his masters will go back to Florida in sunny Miami next December. They said they cannot endure another British winter. I should be happy he has a home, a loving one even more, with really lovely, warm, friendly owners (one I could even speak a bit of French with). And he even has some cats buddies with him. But I can't help feeling sad. Oh, and they offered me to pay for the vet, but I refused. I mean, it was my initiative, that would have been cheeky to ask for them to pay.
Posted by Guillaume at 21:47

This is really interesting. a cat from North America. funny how you guys ran into each other. what a small world!!

Homer the Greek poet was blind too, I believe. So even though Odin can see out of that cloudy eye (surprisingly), he can still be baptised Odin-Homer, in my opinion. I'm glad he has people and a home but I'm sad you'll have to say farewell on his return to Florida.

I'll miss hearing about Odin/Homer. But it's good to know he has a permanent loving home.