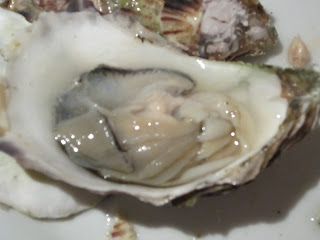 This is another food post I am afraid. November does not seem to bring me much inspiration (well, it better get inspired soon). This picture was taken a week ago. I have decided to end years of oysters starvation. I have been complaining about not eating oysters since I started this blog I think, in French all the time and just thought I would write a post in English about this delicacy.

I don't know why, but I looooove oysters. Well, actually, I do know why: it is both sophisticated and primitive. You eat them raw, straight from the shell. My brother said here on this blog (here in fact): "The first person who ever ate oysters must have been damn hungry." This deserves to be marked as a great unknown line. It is quite difficult to open the thing, but oh so rewarding when you know how to do it and get the hang of it.

My dad made me discover oysters and gave me also my education in anything regarding them: how to prepare them of course (you open them, using the knife as leverage, then put lots of lemon and salt, preferably sea salt), but also when to eat them, during the months ending in ber (September, October, November, December), which are the oyster season.

So what else can be said about oysters? The ones I ate, absolutely delicious, came from Scotland (via Waitrose). They were surprisingly cheap, much more than the ones I used to buy in Montreal. I once ate oysters pies, they taste ok but they are nothing like the raw ones. I also had some smoked ones in tin. It didn't taste good. No, the best way to eat them I think is the primitive way: with salt (sea salt preferably), lemon, straight from the shell...
Posted by Guillaume at 20:49

OMG... I love oysters, straight up