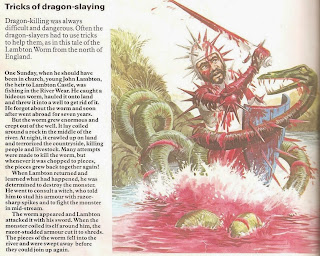 I have first read about the legend of the Lambton Worm in All About Monsters, from which this image is taken from. It made me want to visit the village of Lambton. I have not done so yet, but I think this part of England might become a future holiday destination. Anyway, you can read the account of the legend with the image, taken from the book, but there are better versions online. I found this one, which I particularly enjoyed.

Something in this image, however schlocky it was (and from a schlocky book), really fired up my imagination as a child. You had the desperate hero in a fight to death against a terrible foe, using gadgetry to kill his adversary. You had a dragon more akin to a serpent. Reading the story going with it, and the story really took life. The monster's main characteristic was not a mean of attack, but of defense: its capacity to regenerate. It also has a river as a place of danger and the source of unnamed abominations. You have the morally flawed hero, whose lack of religious devotion made him and his fellow countrymen vulnerable to evil, put them in way of harm. It is a great local legend that deserves to be better known. So I thought I would contribute to spread it on Vraie Fiction. When/if I have time, I might write my own take of the legend one day.
Posted by Guillaume at 12:33

when it said he put it down the well I knew this would not end well,
( pardon the pun,, ),
A very clever witch!!!
What a wonderful tale!
A bit creepy, a bit gory, a hero and a dragon, what more could one ask!
Perfect!
I think you should write one as well!

Gosh. I had that book and spent hours gazing at that very image. :)