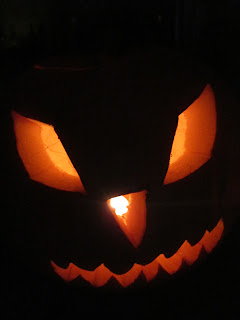 This is my last post for Halloween 2012. One anecdote that happened tonight and sums up the spirit of Samhain. The town where I live, like many English town, does not celebrate Halloween all that much. Maybe it was the weather, rainy and miserable, or the day of the week. But there were only a few houses decorated, I could count the Jack O'Lanterns. Except one house, owned by an American family, who always decorate their home a lot and celebrate it the proper way. On my way back from work, I had to stop by and watch their display.

I entered into the tent leading to the main door, which was a sanctuary. There were witches, skeletons, various undeads on display, and of course a few Jack O'Lanterns. And a sort of tomb. I said I did not come trick or treating, only to admire what they did with the place. There were a couple of women there, a bit like a witch's covent. The lady of the house asked me to come in and asked "Would you like some witch's blood, from Northern Italy?" I could not refuse. So they poured me a (plastic) glass of red wine, which I drank mostly on the way home, trying to protect it from the dripping rain. I had the time to chit chat with them. There was a two-headed undead/witch thing hanging at the door, delicious sinister, I asked where they found it. She said somewhere in America, then: "It's my aunt and uncle." I replied: "Lovely people." Then shortly after I left, but she had time to tell me that while the tomb was empty now, the zombie that had been lying in it (husband? son?) would be back in about fifteen minutes. But I was tired and hungry, so I left.

There are at least a dozen of great unknown lines that have been said in the short conversation, I think the witch's blood from Northern Italy one deserves to be immortalised here. Witch's blood for red wine, I don't know why but I find it brilliant (and I didn't get the joke at first, being tired, it was only drinking it that it struck me). But more than the lines, it was the gesture and the way they were in the spirit of Halloween that I enjoyed. I loved the generosity, the hospitality, the fact that they had something ready for adults, even those without a costume. This is how trick or treat should be. It made my Halloween night.
Posted by Guillaume at 22:41

Wow..what a wonderful treat for your Halloween!

Glad you had a good night, we were disappointed at my house, not a single trick or treater, but then we do live in the country. I personally am not going to turn down wine, witches blood or not! Lol! On to Halloween 2013!

What a wonderful encounter on an otherwise bleak night!

Thank you all for your comments. Hope you keep reading the blog even though Halloween is over.

Happy November Guillaume! As always, I am running late with catching up. I wanted to go back to your Halloween night post to see what evil goodness I had missed, and of course I wasn't disappointed. What a magically delicious little scene you were lucky enough to encounter on All Hallow's Eve! Sounds fun and fiendish too. Ha...'witch's blood'! yum yum So does that work like vampire's at all? Are you now a full blown witch since you drank of their blood?! Spooky! You'll be spell casting before you know it...ha! Hope you had a great October my friend! Looking ahead to the Autumn season next year. :o)