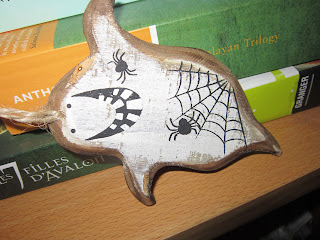 I bought this decoration at the local sweet shop, which is not closed yet as it was supposed to. It is, however, on sale. They current owners advertised it as "a profitable business", so it might survive. This is the foreword, my post is not about the sweet shop. It is of course part of the countdown to Halloween and this ghost is perfect to accompany the post. I love his crooked teethed smile and the spiders covering his shroud (or his ectoplasm?).

I thought about ghosts recently and their place in the horror folklore and literature. I am in no way expert, but I do have some knowledge and years of studies of literature did give me some analytical skills. So about ghosts... The ghost above might not be as friendly as Casper, he still does not look very scary. At best he looks mischievous. Ghosts are not always hostile to mankind, but most are terrifying, or at least try to be. They predate the horror genre in folklore and mythology, even in tragedy they are plot devices and deus ex machina. In a time of rationalism, when even horror movies often picture psychopaths and monsters from space more often than they do supernatural beings, they still survive: alien abduction might be the modern superstition, but there are still people who believe in ghosts and even think they saw one. I don't believe in ghosts (or in alien abductions), but I do understand the appeal of ghosts: if they existed, they may not prove that souls (or God) do, but they would sure give some kind of credentials to a hypothetical life after death. I think even in the scariest, nastiest ghost story, there is an element of wish-fulfilment.

Horror stories were originally called "ghost stories", whether they had ghosts in them or not. As antagonists, ghosts pose a problem to the writer (and the reader who wants to be scared): in essence, they are exactly this, essence, they are a presence, but are immaterial, thus they do not in theory present a physical threat. They can be repulsively ugly, terrifying, they can scream, have sepulchral voices, skulls instead of heads, they still do not represent a physical threat, for all their malevolence. Of course, this is not quite true: their mere presence can lead one to madness, even suicide. Often they can hypnotise or subjugate human beings and push them to their death. And they can be, at least partially, material. Poltergeists obviously can influence their physical surroundings. Someone like me who read plenty of ghost stories know that many ghosts can take material guises, inhabit statues, the bodies they had in their human life, can take the form of an animal, haunt a tree and so on and so forth. In a way, they are maybe the most inspiring monsters of the horror genre, because they come in all shapes and forms. And I will finish this post with a quote from Robert Aickmam, which I found in The Oxford Book of English Ghost Stories: "The ghost (...) reminds us that death is the one thing certain and the thing most uncertain; the bourn from which no traveller returns, except this one."
Posted by Guillaume at 21:17

A nice, concise examination. I do SO love a good ghost story, and I'm fascinated by those who claim to have encounters with them. In fact, I'm currently reading a rather enjoyable ghost yarn, which I hope to review soon.

Oh, and I LOVE the decoration! He certainly looks to be a prankster to me!

What a fun decoration. I especially love the spiders:-)