A Meeting with Jack (part 2) 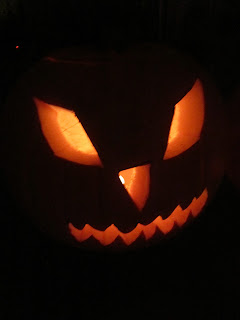 This is the part 2 of this year's Halloween story. You can read part 1 here. It is a sort of sequel of the story of Jack O'Lantern which you can read here and here. I will try to turn it into a Halloween tradition of Vraie Fiction.

Pat Halloran wondered if he was not delirious because of the alcohol, yet it all felt so real, the fire, the pumpkin which he could smell as easily as he could see, and the voice of Jack, with that damned accent.

"One day, or one night rather, a Halloween night like this one, I managed to get the better of Old Nick and made a deal with him: he would not take my soul when I die. He kept his word. But I had sinned so much, had been such a wicked man in my lifetime that Saint Peter would let me in upstairs. So I was cursed. Cursed to wander around this world until Judgment Day. Cursed to see this world through the light of this lantern made with a coal from the hottest pit of Hell, without being able to feel. To be eternally thirsty, but eternally sober. You know what, Pat? I think eternal damnation would have been a better fate."

Pat thought the smile of Jack, even though fixed in the flesh of the pumpkin, had turned larger.

"But at least," the ghost carried on, "if I cannot drink or eat, I can at least act upon my wickedness. I am cursed, I also bring curse wherever I go. Those who see me close are either in mortal danger, or some great tragedy is going to fall upon them. But don't worry Pat, in your case, it is only in mortal danger."

Jack O'Lantern chuckled. Pat Halloran felt a sharp pain in his left arm, then a huge weight crushing his heart.

"Time to pay for your own wickedness, old man. If it is any consolation, I envy you," said Jack as the drunkard was shrieking on the ground, giving his last breath. "After all, you know where you are going."
Posted by Guillaume at 21:24

Oooh....how very sinister and dark! I loved it! Although I should not like to meet up with your Jack on any night! The part about being eternally thirsty but sober was particularly descriptive...I dare say, my mouth began to feel a bit dry even! Bravo! Applause Applause! Thank you so much for sharing of your talents! :o)