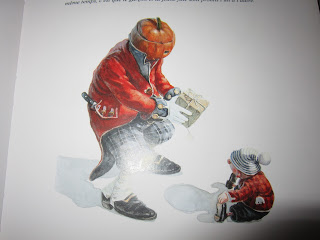 So this is tonight's countdown to Halloween post. The picture uploaded is of course taken from this book. A simple pictures, but so sinister. Jack O'Lantern, or someone with a Jack O'Lantern/carved pumpkin as a head (or a mask) offering a gift to a chubby child. But look at what is hiding in Jack's pocket. This picture triggers childhood fears.

I don't remember many childhood nightmares, but those I do are still vivid in my head. My earliest one was of an army of monsters, or at least a pack. There was a humanoid green scales monster, half lizard half ape, with sharp canins and red eyes, the leader of the band, and his wolf-like second in command (as big as a bull, black fur, really scary). They were looking for me in the house, I was trying to hide, sometimes they just turned their gaze towards me, and just kept it there, showing me they knew exactly where I was hiding. I also remember dreaming of a witch who morphed into a friendly creature (a fairy or a princess), so she could kiss children and turn them into toads. They had to receive the kiss willingly. I had a few other nightmares with witches. I also dreamt of running away from another army of living dead/monsters that had taken over a village. Older, I dreamt of Dracula after reading the novel. Another little anecdote which I mentioned before, very interesting: my brother PJ once dreamt of a bogeyman, but the nightmare was so good that we discussed it at lenght all day, he draw the monster, a mix of Count Orlock and a serpent man if my memory serves me well, and we hoped he would dream the sequel the next night. Sadly it didn't happen. And you, what are/were yours?
Posted by Guillaume at 23:08

My childhood nightmares were of two main things that I dreamed of frequently. The first was of a creepy little green man/creature that would sit up on the top of my door and stare at me and taunt me with an evil laugh. He scared me so bad and I would dream of him often. The weirdest thing about that particular dream, is that when I was grown I mentioned it to my Mom, and she said that she also used to dream of a little green man just like I described when she was a child!! Yipes....that's just really WEIRD and a bit scary actually!

The other dream was of an abandoned, desolate ghost town. I would be walking in it as a small child, lost and scared. The buildings were decrepit and I was all alone. I wandered into one of the buildings and was started to find dead people/skeletons and old blood around. That one really scared me a lot too and I dreamed of it several times as well. I'm sure they mean something sinister and horrible about my psyche, but I'd rather not know what...ha! (Love the Pumpkin Head image too!)

I remember as a little child dreaming of my high chair going down the basement with me inside.

My other nightmare as a child and onto adulthood has been reoccurring tornado dreams.

I never remember dreams in any great detail. But one that has been with me all of my life is a dream of waking up to see large insects crawling all over the walls. So vivid, I would sometimes wake up screaming. <:O

I think that my earliest memorable nightmare was of Godzilla looming over the horizon (which was just the fence overgrown with blackberry bushes in our backyard.

As Godzilla neared the fence, he turned into Miss Piggy.

My nightmares are really dull compared to those above, especially the Gozilla/Ms Piggy one. Lol. I hardly had nightmares in fact, but an occuring one I had as a child was a shadowy figure at the foot of my bed. It had no face, never spoke, but seeing it paralysed me. I couldn't speak or turn on the light to banish it. Creepy stuff.

Wow, I never thought this was going to be such a commented post!
@Mantan Calaveras-Miss Piggy? That is scary!
@Anonymous-I did have similar nightmares, about a shadowy figure walking around the house and in the bedrooms.