A Meeting with Jack (part 1) 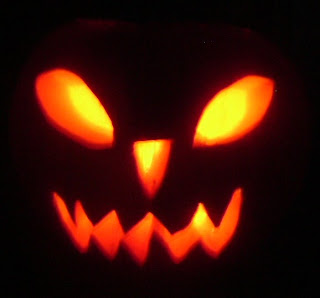 Part 1 of my Halloween story.I hope you enjoy.

It was on Halloween night that Pat Halloran died. That night, like many others, he had drank plenty of Molson and Canadian whisky in a small bar in Magog, where he had been thrown out as he had picked up a fight, and was heading home, walking through a path crossing corn fields. He was a tall and large man, with a strong frame, black bushy hair and a round sanguine face that looked crimson because of the alcohol.

Pat was walking laboriously down the path, his eyes watching his feet so they wouldn't stumble on a rock or a hole in the ground, when he felt a presence ahead of him. It was first a smell of smoke and fire, mixed with something like ripe, moist fruit. He rose his head and saw a tall and lanky figure a few steps ahead of him. The man was tall, clad in an old fashioned Burgundy red coat. Then Pat noticed the stranger's head. It was covered by a pumpkin, a pumpkin carved to look like a face. The eyes were diamond shaped and it had a sharp teethed mouth, giving a grin that was both cruel and sad. It must have been the alcohol playing tricks on him, Pat thought, as there was a fiery red light shining from inside the pumpkin. He could feel the heat of the fire emanating from the pumpkin, but with it there was a freezing chill surrounding the stranger.

"How do you know my name? Have you been around here?"

"A couple of times I have walked through the Eastern Townships, Pat. I travel a lot, never had the time to stop by much, but tonight we had to meet."

Pat Halloran did not like the familiar tone the stranger was taking and he was eager to be home and drink what was left of the bottle of gin he was keeping under the bed.

"Whatever you think you have to do, you get lost!" said Pat. "I go my way, you go yours and you get off the path."

"That is not possible Pat. You are not going any further tonight."

"Like Hell I won't!"Pat roared and he ran the stranger. The lanky man didn't move and didn't try to avoid the angry fist of the drunkard. When the fist reached its target the stranger did not flinched, did not move of an inch, but Pat felt a sudden chill spreading all over him, so overwhelming that he fell in his knees, unable to breath for a moment.

"I told you!" said the stranger in a mocking tone. "You cannot beat me, I don't feel pain anymore, and when I am in someone's way, I only leave when I want. Now, no more funny business. You don't have much longer."

"My name is Jack," said the stranger. "I was once like you: a crook, a drunkard, the worst of all Ireland in fact. Well, like you, I was not as big or as quick to anger. I was nasty in other ways. I was smarter too, if I may say so myself, even drunk. And I was often drunk."

"Well, it's not like you have a choice, so you might as well. I don't have many occasions to tell my story, so I enjoy that one. I said I was often drunk. Ah I loved alcohol! The smell of it, the taste of course! Stouts, Irish whiskey, gin, poteen, wine from France and Italy sometimes... Oh how I miss getting drunk! And I even miss the hangovers. The taste of a good Irish breakfast afterwards. With eggs, mushrooms, bacon and white pudding and fried potatoes... I miss all this too. See, Pat, I am a ghost. I do not feel anymore, but I remember when I could."

"Yeah right! You are not a ghost, you are crazy!"

Jack suddenly leaped forward, grabbed Pat by the collar and pulled him by his face. Pat felt the freezing grip of Jack's long fingers, and the fire of his breath. He looked into the eyes of Jack and saw with terror that the pumpkin was hollow, save for a burning coal in the middle of it.

"Crazy, really? I sure don't have all my head anymore. I have to do with a lantern."

Jack released the drunkard from his grip. Pat Halloran fell heavily on the ground.

"I shall carry on now, and no more interruptions."
Posted by Guillaume at 17:47