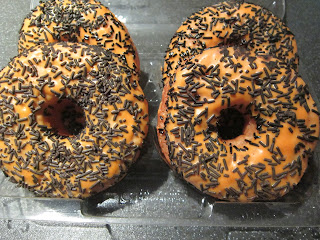 I bought these a few days ago. They were a pound in Sainsbury's (they sell all Halloween desserts for a pound, so it's a bargain). I crave donuts from time to time and those are Halloween donuts, so I had to buy them. Maybe I am a sucker. After all, they are normal, glazed donuts, only with an orange glazing and some chocolate sprinkles.  Their association with Halloween is tenuous at best.

Then again, maybe I am not such a sucker. For one, those donuts are associated to the gluttonous aspect of Hallowen, of which trick or treating is a modern manifestation. Donuts are also associated in The Simpsons's episode Treehouse of Horror IV, where Homer sells his soul to Satan for a donut (you can see a few minutes of the episode here). In a way, he makes a Faustian pact. Now, I can also mention that Anthony Burgess,my favourite author, wrote in a dissertation on Marlowe's Dr Faustus that Faust secretly desires damnation because he wants to experience hell. So every time I eat a donut I think of this episode of The Simpsons, and then of the Faustian pact, and about the appeal of eternal damnation when one is tempted by Satan in folklore...

And I cannot believe that in one post I talked about Marlowe, Anthony Burgess, the legend of Faust, Halloween, The Simpsons in a post about trivial donuts.
Posted by Guillaume at 20:41

"Donuts. Is there anything they can't do?"