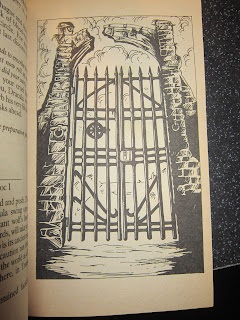 Here is another Countdown to Halloween post, which I hope vampire and Dracula aficionados will enjoy. This picture was taken from Dracula's Castle. It represents the gate of, well, Dracula's castle. I uploaded it because: 1)I am going to talk about a part of the count's past that is little dwell upon and 2)it could be the gate of another sinister building, say Scholomance.

Scholomance is a mythical place in Romanian folklore where the Devil himself was supposed to teach pupils witchcraft. It is also, in the novel Dracula, a school the eponymous count attended. This is what Van Helsing says about it: "The Draculas were, says Arminius, a great and noble race, though now and again were scions who were held by their coevals to have had dealings with the Evil One. They learned his secrets in the Scholomance, amongst the mountains over Lake Hermanstadt, where the devil claims the tenth scholar as his due." It is implied here, I think (you can tell me if you disagree and why), that Dracula was transformed into a vampire there, not by the usual way (being bitten by one), but through the action of Satan, and of his own free will. Which makes him even more sinister.

Since I first read the novel, I have been fascinated by Scholomance. I often wondered how it must have been for Dracula, what and how he studied, and what exactly went on his transformation from an evil man to a nosferatu. Bram Stoker knew probably just as little about the folklore surrounding Scholomance as he knew about the historical Dracula (read more about this here). So this aspect could be developed by writers of fiction. I wonder why so many followers wrote sequels (so often poor ones) of the original novel, instead of making prequels, telling the story of Dracula before Jonathan Harker met him. I think I might give it a try here, on Vraie Fiction, a bit like I did for the story of Jack O'Lantern (Read it here: part 1 and part 2). That could be quite fun.
Posted by Guillaume at 21:50

That would be interesting.I always enjoy learning a character's back story.

I would love to hear the back story as well. Scholomance sounds very mysterious...great post!!

Well, you KNOW my interest in it! If my book is EVER finished, the Scholomance will play a large part in the overall narrative.

I'd love to see your take on this legend, Guillaume!

Yeah...I was just thinking that the whole theme of a Scholomance for a book would be very interesting. You writer's out there need to get on this pronto...ha!

Well, I guess I really have to write it now.