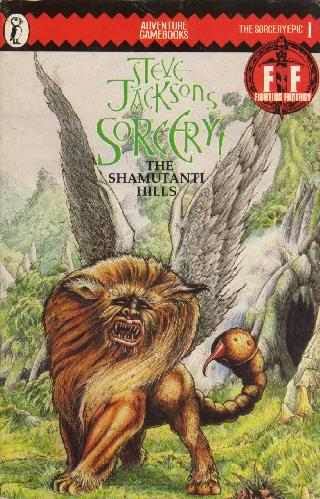 I must have a geek fever: I am in the mood these days to revisit another Fighting Fantasy Gamebook, actually a whole saga: the Sorcery! series, where you play either a magician or a warrior and where you need to recapture a magical artifact from an evil archmage through the course of four books. I first read The Shamutanti Hills when I was 10. It is the only book of the whole series I read, actually. I was attracted by the picture of the manticore on the front cover. It looked devilish and very menacing and was contrasting nicely with the bucolic background.

In French the book was titled "Les collines maléfiques" (i.e. The Evil Hills). In fact, the hills were not really evil. Yes, they were full of dangers, but there was also plenty of little villages that were friendly and your character was not lost for ages in dark dungeons, mazes or say a sinister forest. As a setting, the Shamutanti Hills were full of character and the book in itself was more of a medieval fantasy travelogue with a few self-contained adventures and some interesting encounters with locals. Oh and there was a manticore to fight near the end of the journey. It influenced us enough in later years when we started playing Dungeons & Dragons: one of the most important monsters we fought in our first adventure was a manticore.
Posted by Guillaume at 15:42