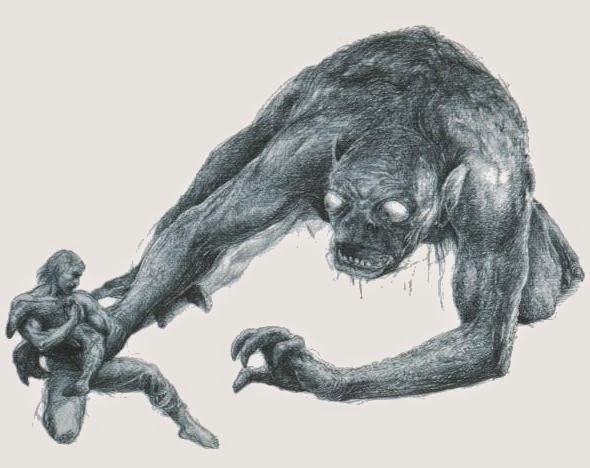 As I was planning to do soon after I bought this book, I read Beowulf. And I have a terrible confession to make: I was not overly enthusiastic about it. Not nearly as much as I was reading the saga of the Volsungs, which I really, really loved and could not get enough of. I don't know why, it did not click with Beowulf. This is not to say that I did not enjoy the read, just that I did not love it as much as I thought I would. Shame on me.

That said, I loved, loved, loved the Grendel character. You can see him here, as drawn by illustrator Alan Lee. He looks very much like Gollum in this picture. It gives a certain vulnerability in spite of his malevolence. Grendel's physique is only very vaguely described in the epic poem. We have verses like these:

"Rage-inflamed, wreckage-bent, he ripped open
the jaws of the hall. Hastening on,
The foe then stepped onto the unstained floor,
Angrily advanced: out of his eyes stood
An unlovely light like that of fire"

Grendel is described through his actions (here its display of strength) and emotions, this ever present anger. It is evocative rather than descriptive. Grendel is one kind of monster: descendant of Cain, he thus has a human parentage. He is not quite a giant, although larger than a man, he has the appetites of an ogre, but his motivations are at the core vindictive: it is the songs and laughter coming from Heorot that drive him to take vengeful actions. In its simplicity, it is a powerful plot. An inspiring one too. I mentioned in my previous post on Beowulf that I intended to read it partially to calm my longing for Dungeons & Dragons. Now I kind of regret not reading the story a few years ago. A monster inspired by Grendel could have made an excellent foil for a few adventures.
Posted by Guillaume at 22:51

She is meant to be, but it is Grendel himself who really caught my attention. His mother will be the object of another post, one day.