Pr. Moriarty (the grandfather of all modern villains?) 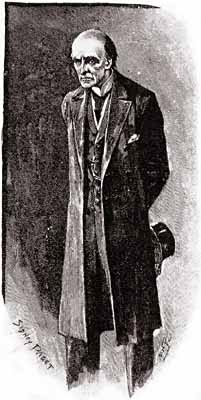 I have been wanting to rediscover Sherlock Holmes recently, I don't know why. I haven't read a Sherlock Holmes story since 2009, I think. And I suddenly got in the mood to read some. I might borrow a book or two at the library (yes, I know they are online, but I don't want to read it online). Sherlock Holmes is, after all, the grandfather of all modern detectives, whether they are private or from the police force. That said, I think my interest is not so much about Holmes as it is about his nemesis, Professor Moriarty, the "Napoleon of crime". I know he was never really conceived as his nemesis by Sir Arthur Conan Doyle, who simply invented him in The Adventure of the Final Problem to find a worthy adversary to kill his cumbersome creation. He is then mentioned in other short stories, and I believe I read them all, but I did not read yet The Valley of Fear, in which he plays a role in the plot. This is going to be my next Sherlock Holmes story, I think.

Why am I so interested by this villain, who is relatively unimportant in Holmes' canon and whose background is inconsistent? Not because of its posthumous fame, when he became, outside the canon, Holmes' archenemy. But because I believe that Doyle created the grandfather of all modern villains, maybe more than Holmes was ever the grandfather of modern heroes. Moriarty was a gang leader whose rarely, if ever, gets his hands dirty, an evil genius, he was also a bit of a mad scientist before his time (as he was a mathematician). His bastard sons are numerous. Among them: Ernst Stavro Blofeld, Alain Charnier and the Greeks in The Wire. While heroes in crime fiction have become ordinary men, often intelligent but not to the point of turning into the almost inhuman thinking machine Holmes often was, there are still, even in modern fiction, evil men of exceptional nature like Moriarty. Yes, there are plenty of thugs, low-mind brutes, but even in modern crime fiction, even in realistic shows like The Wire, the exceptional criminal shows up. Crime fiction is a genre where there are still many Napoleons of crime.
Posted by Guillaume at 20:50

I never thought of Moriarty in this way, but you're right, I really enjoy the BBC series of Sherlock Holmes, although I know not all do, but I have read the books over and over, so I suppose you could say I am a fan!!