Sigurd and the Dragon 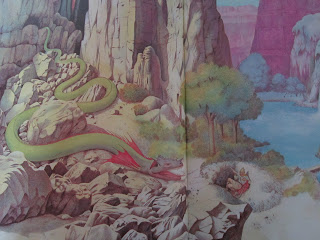 I left work earlier because of the snow that fell over the UK. Luckily, the trains left on time, so I was not stranded anywhere. Anyway, I spent my free afternoon reading, amont other things (as I read many books at the same time) Gods and Heroes from Viking Mythology. I am still at the creation of the world, with frost giants being very loud when they are having council, which is irritating Odin and his brothers. I am looking forward to get into the stories of Viking heroes.

Last Christmas, I read the story of Sigurd to my godson, because he had been very impressed by the image I uploaded on the right (drawing by Giovanni Caselli). I say I read it, but I didn't read it much, as it was quite a long story. I barely had time to read the introduction, until Fafnir murders his father Hreidmar and turns into a dragon. At least my godson had time to see the dragon get into the story. My mother kept telling me: "Oh, just read the bit about the dragon!". But it is difficult for the story to make any sense without any context. So I read it from the beginning, until he started dozing off. Of course I looove the legend of Sigurd. I read the Sigurd legend before the stories it had inspired, among them The Lord of The Rings, so it has an "original" charm to me.
Posted by Guillaume at 17:44

Thanks for reminding me. Forgot how much I liked this story and how it spawned so many tales. Thanks for posting.

It was a pleasure. And thanks for visiting and commenting again on my blog!