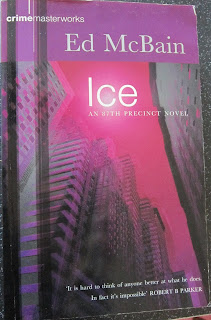 I have finished reading Ice by Ed McBain at the beginning of the month. I blogged about it here. It is from the 87th Precinct series, which I find thoroughly entertaining. McBain's novels are police procedural, so the criminals in them are often common, ordinary people. Either men who killed, or small time hoods. They are rarely larger-than-life, except a few like the Deaf Man, who is a recurring nemesis akin to Moriarty. In Ice, I was surprised to see in Ice a larger than life villain. He is a massive (but without an ounce of fat), hardened ex-convict wanting to have a piece in the local drug trade and dressing himself and passing as a... Catholic monk. He calls himself Brother Anthony. In the movie adaptation, he was played by British actor Nigel Bennett. I don't think I watched Bennett in anything else than this.

Brother Anthony is a great badguy for many reasons. I am usually not keen on weirdos in crime fiction, because they often end up too eccentric and thus not scary, but his anachronistic monk's clothes and tonsure make him just this side of weird, enough to be unsettling, but too much to make him unbelievable. And it makes sense that he tries to hide his true nature by disguising as a monk: people forget the huge frame, the thugish look and think he is a man of God. His disguise is in such contrast with his personality. Brother Anthony is not ascetic, he likes food and drinks and women (his girlfriend is a large lady just as evil as he is), he is eager to use violence and even torture to get what he wants. I don't want to give too much away, but as far as I know Brother Anthony was a one novel character in the novels of Ed McBain. I wish I could see more of him. At least, he could be the prototype of some badguy in another series of novels. Just a thought.
Posted by Guillaume at 13:51