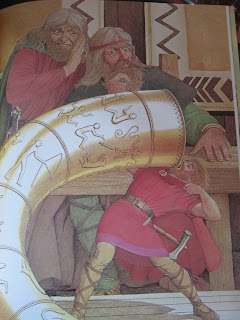 After a blog post on the Day of Odin and the Day of Tyr, I had to write one about the Day of Thor, Thursday. The picture at your left is of course taken from this great book and was drawn by Giovanni Caselli. It is the first uploaded picture of 2013. I thought it would be quite fitting as a transition post, after the Christmas holidays, as I associate Viking mythology with Christmas and winter. I am not the only one: my brother read the book during the holidays. it is no more Christmas, but it is still winter.

So, what to say about Thor's Day? About the day and the god, in fact. I have more to say about Thor himself. Thursday is for me the day where the weekend is so close, yet so far. Thursday is also Jupiter's Day (Jeudi as we say in French), who is of course the same god, only with a different name than the Norse's version, and a different place in the godly hierarchy. Thor was an important god, but he was below Odin. I like him enough, but less than Tyr, whom I find more admirable. I do enjoy a lot, however, many of Thor's adventures. I think it is for me the main appeal of Thor: the adventures he lived. They are more interesting to me than the character himself. The image I uploaded is a representation of an episode of Lokrur. I will not spoil the story for you and tell what is in the giant cup the giants have given him. Let's just say it is maybe the ultimate drinking challenge. I hope you enjoy it.
Posted by Guillaume at 22:03

Keep Christ in Christmas and Thor in Thursday, I say.