Snow according to Calvin & Hobbes 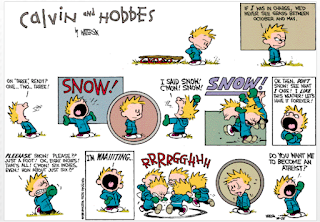 It is much colder these days than it has been the last few weeks, for the first time in a long while we even have temperatures going below zero, yet there is no snow. They have been forecasting a possibility of snow, but so far nothing. And I am growing more and more impatient. Which reminds me of the state of mind of often had as a child as winter was getting nearer and nearer. It is exactly like the one of Calvin (from Calvin & Hobbes) in this comic strip. In a nutshell, this is the story of my childhood when I was eagerly waiting for winter. It's also a hilarious strip and I wanted to share it with you.
Posted by Guillaume at 17:47

I hope you get some snow soon!

"Do you want me to become an atheist?" LOL! We're supposed to get some snow here today but so far, nothing.