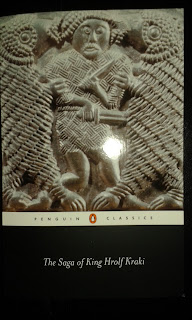 Christmas is coming and so is winter (or so they say). As both seasons are less than a month away, I have decided to put myself in the mood and read something suitable for the upcoming Christmas. As you know, I associate Christmas with Viking mythology, so it was fitting that I chose to read something from Norse legends. Last year, it was The Saga of the Volsungs. This year, it is The Saga of King Hrolf Kraki, pictured left. As soon as I saw there was a copy in English available, I bought it. I started it yesterday. So far I am still reading the introduction, which is fascinating in itself.

Like for most Viking legends, I was first introduced to the Saga by Gods & Heroes from Viking Mythology when I was a child One of the stories told in the book was the meeting of Bodvar Bjarki (or Battle Bjarki as the translation called it) with King Hrolf and his court. Some of the story was set during Christmastime (well, Yule) and the heroes had to fight a dragon on the night of Yule. Apparently, the story has the same roots as the story of Beowulf and those among you familiar with it can easily recognize very similar narrative elements. I blogged about Bodvar Bjarki in a post more than two years ago. In some ways, I think I even prefer him to Sigurd. I think he also inspired, at least in parts, the ranger character I have been playing for our Dungeons & Dragons campaign. Old Viking stories are also used for this: both an inspiration for D&Dr and a way to keep patient until the next time I can play. Now that my brothers and I are adults, we only play at Christmas and since I will not be home, I will sorely miss it. But until then, I have a whole saga of Viking feuds filled with larger than life characters to read.
Posted by Guillaume at 21:18