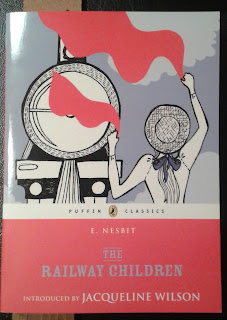 I bought The Railway Children at the National Railway Museum, where we saw a stage adaptation of the novel. I first discovered E. Nesbit through her ghost stories, which I loved, and I wanted to know more about her and read what is maybe her most famous work. It's a classic of children literature which I never knew or heard about as a child. I actually never heard of it until I was well into adult age. Which is almost surprising, given that I love everything train related. I guess I am not that educated about all the classics of English literature. I am about to finish it. Because I saw the play, I think I can already recommend it. It has been one of my November reads and it helped get through a dreary month. It is a delightful little book, a very English one, with tea time, English countryside and of course featuring a railway at a time when trains were the nation's technological and transport pride. It is told through children's perspective full of innocence, but not quite an idyllic one. The universe depicted by Nesbit is not devoid of dangers, sadness and sometimes even tragedy (although it is averted in extremis). Since it was first published as a serials in a magazine, it is a very episodic novel, most chapters having self-contained stories. Unlike its most famour movie adaptation and the stage version I saw, where Yorkshire is mentioned as the setting, the novel is set in an unspecified part of rural England. But reading it, it's always Yorkshire that comes to my mind. So anyway, I strongly recommend it.
Posted by Guillaume at 20:32

Now I must add this book to my list! We've a daughter who was in West Yorkshire for the first semester of her senior year in college! I also think of James Herriott (not his real name) when I hear of Yorkshire.